Since 1792, the United States Mint has had a long history of offering up gold, silver, and copper coins for sale, but it wasn’t until 2006 that the first pure .9999 24-karat gold coins by the United States Mint were offered up to the public. The impetus for the gold coin’s minting was the Presidential $1 Coin Act of 2005. This new act of Congress authorized the production of $1 coins (composed of copper with a brass cladding) honoring the Presidents of the United States. The intent of the act was to bolster public demand for a $1 coin following the failure of the $1 Sacagawea coin. It was believed that a new design would help the coins gain widespread circulation, considering how well the the State Quarter program had been doing. Along with the provision for the $1 coin, the Presidential $1 Coin Act mandated the issuance of a $50 bullion coin, which would be a reproduction of the 1913 Buffalo nickel (also known as the Indian Head nickel).[i] The intention was to offer a coin that could compete with foreign 24-karat gold bullion coins, as previously, other gold U.S Mint coins, such as the American Gold eagle, would be minted using 91.67% gold. On June 22, 2006, the American Gold Buffalo became the first pure .9999 24-karat gold coins offered for sale. 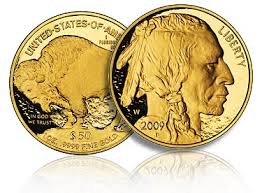 The American Gold Buffalo is a beautiful coin that follows the original design of the Buffalo nickel. The nickel, first struck by the United States Mint from 1913 to 1938, was designed by sculptor James Earle Fraser.  The obverse (front) of the coin features the visage of a right-facing Native American Indian with a braid, and feather in his hair. Struck at West Point Mint in NY, only proofs will bear the “W” mintmark on the obverse (front) of the coin, behind the neck of the Indian.  Along the upper right, the word “Liberty” is displayed, while the year is on the lower left. It was greatly debated, even throughout Fraser’s life, who had been used as the model for the Indian head.[ii] Fraser told inconsistent stories regarding the design, once stating that “[b]efore the nickel was made I had done several portraits of Indians, among them Iron Tail, Two Moons, and one or two others, and probably got characteristics from those men in the head on the coins, but my purpose was not to make a portrait but a type.”[iii] The right to take credit for the inspiration was highly contested, with many men laying claim to the honor. Whomever the model was, the design has endured and been reproduced countless times, making it one of the most iconic faces to be found on coins.

The reverse (back) of the American Gold Buffalo, is said to depict Black Diamond, an American Bison, standing on a mound of dirt. Black Diamond was massive, the largest American buffalo who lived in New York City’s Central Park Zoo in the 1900’s.  On the top of the coin, there are the words “United States of America”, and “E Pluribus Unum”. On the bottom left, under the buffalo’s head, can be found “In God We Trust”, which did not appear on the original Indian Head nickel, but has appeared on all U.S gold coins since 1908. Along the bottom can be found “$50” (this differed slightly from the original Buffalo nickel which showed a face value of “Five Cents”), and “1 oz. .9999 Fine Gold”.

The Gold Buffalo coin has been met with great success. Since it first offering in 2006, over 2.1 million Gold Buffalo Bullion coins have been minted.[iv] With a mintage limit of only 300,000, and an enforced limit of ten coins per household, the 2006 proof version of the American Buffalo became highly sought. In 2008, along with the original $50 piece, $5, $10, and $25 coins were minted with 1/10 oz, 1/4 oz, and 1/2 oz of gold respectively. That year also offered a collectable, uncirculated version of the coin that was made available through coin dealers. By September 26, 2008, the U.S Mint announced a temporary cessation of American Buffalo coin sales due to surging demand brought on by the subprime mortgage crisis of 2008 which affected the price of gold.[v] In 2013, to celebrate the 100th anniversary of the original Buffalo nickel, a reverse proof version of the American Buffalo was offered. While the American Buffalo carries a legal tender value of $50 USD, the popularity of the coin and the increased price of gold have caused the coin’s value to climb. When the coin was first minted in 2006, the price of a proof coin was $800,[vi] but by 2011, the proof coin’s value was $2,010, and the price has continued to stay high.

The American Gold Buffalo coin represents a beautiful work of art, and a meaningful piece of history. Fraser was inspired “…to do something totally American- a coin that could not be mistaken for any other country’s coin. It occurred to [him] that the buffalo, as part of our western background, was 100% American, and that our North American Indian fitted into the picture perfectly.”[vii] One just needs to look at the American Gold Buffalo to see that his vision was realized.

All data and information provided is intended solely for informative purposes and is not intended to be considered individualized advice or investment recommendations. You understand that you are using any and all information available on or through this site at your own risk.

This entry was posted in Gold. Bookmark the permalink.