Posted on February 28, 2017 by Lauren Bernstein

Coins give us a great glimpse into history, as they are often closely tied to the events of the times. This proves true with the American Silver Eagle. Throughout the 1970s and early 1980s there was a move to sell silver from the Defense National Stockpile to help reduce the national debt, but it had been met with congressional opposition[i]. Whenever there was a sell-off, or even an announcement of a sell-off, the price of silver would immediately decline.[ii] Futures traders would hear about the proposed sales, and they would begin to shed future contracts believing that the sell-offs would cause a drop in the price of silver. Then in the summer of 1981, the House Armed Services Committee made the move to allow the sale of government-owned silver to help with the financial budget. Both the House and Senate agreed to have 75% of the stockpiled silver, which amounted to 105.1 million troy ounces.[iii] This sale was to take place over a three-year period, but the response to this announcement had silver prices drop 11%.[iv] The United States silver mining industry, specifically politicians from Idaho (a major silver-producing state), argued that the sale would be detrimental to the industry, and a bill was signed to stop this sale of stockpiled silver.[v] It wasn’t until 1985, after many attempts, that the sale of silver was finally approved with the “Liberty Coin Act” amendment.[vi] This new legislation required that stockpiled silver be used to mint coins, and finally, the American Silver Eagle was poised for its debut.  On October 29, 1986, in the San Francisco Assay office, the first American Silver Eagle coin was struck. 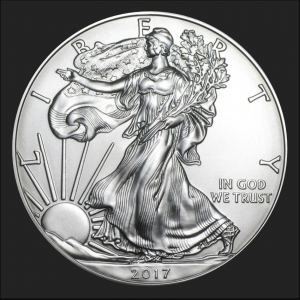 The American Silver Eagle is a beautifully designed coin.  The coin’s obverse (front) pays homage to German immigrant Adolph A. Weinman’s Walking Liberty Half Dollar, which was minted from 1916 to 1947. The Walking Liberty had been a favorite of the public, evincing feelings of patriotism and hope, and the American Silver Eagle followed in its footsteps. As Secretary McAdoo said in 1916, “The design …bears a full-length figure of Liberty, the folds of the Stars and Stripes flying to the breeze as a background, progressing in full stride toward the dawn of a new day, carrying branches of laurel and oak, symbolical of civil and military glory. The hand of the figure is outstretched in bestowal of the spirit of liberty. The reverse of the half dollar shows an eagle perched high upon a mountain crag, his wings unfolded, fearless in spirit and conscious of his power. Springing from a rift in the rock is a sapling of mountain pine, symbolical of America.”[vii] The word “Liberty” frames the top of the coin, with “In God We Trust” on the right, and the year on the bottom. 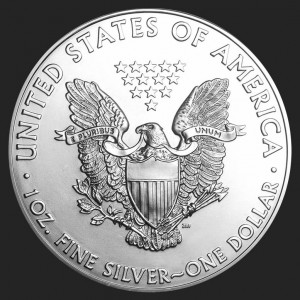 The reverse (back) of the Silver Eagle was designed by the twelfth Chief Engraver of the United States Mint, John Mercanti. The iconic eagle, which echoes the Great Seal of the United States, is portrayed with wings proudly held high, as he clutches arrows in his left talon, and an olive branch, the symbol for peace and victory, in his right talon. Above the eagle is a representation of the original colonies with thirteen five-pointed stars. Inscribed on the top are the words “United States of America”, with “1 oz. Fine Silver ~ One Dollar” along the bottom. On the banner that is held within the eagle’s beak there is found “E Pluribus Unum”, as well as any applicable mintmarks.

The American Silver Eagles have continued to be made, and are offered as bullion, proofs, or uncirculated, with a few special issued editions. Silver eagle coins have been produced at the San Francisco, Philadelphia, and West Point Mints. The bullion coins do not have any mintmarks, but from 1986 to 1998, they were produced at the San Francisco Mint, between 1999 to 2000, they were produced at the Philadelphia Mint and West Point Mint. Since 2001, they have been minted at West Point, with supplementary production from San Francisco starting in 2011. Proofs will bear their mintmarks of “S” for coins made from 1986-1992 in San Francisco, “P” for Philadelphia from 1993-2000 and “W” for West Point from 2001 onwards (though in 2009 no proofs were minted). Uncirculated American Silver Eagles, which were issued from 2006-2008, and then again in 2011, were minted at West point, and bear the “W” mintmark.[viii] Special issues have been minted to mark historical occasions, such as the 2000 “United States Millennium Coinage and Currency Set”, which featured a 2000 Silver Eagle bullion coin, or the 2006 20th anniversary of the American Silver Eagle program, which showcased a special reverse proof.

From the first sales in 1986, the distribution of these coins has been impressive, with initial inventories selling out almost immediately. Silver Eagle bullion coins are not sold directly to the public from the United States Mint, but rather, authorized purchasers can buy and then distribute these coins. Between 2008 and 2010, due to the global recession, demand for the Silver Eagle coins skyrocketed, causing shortages of supply. On September 22, 2010, the “Coin Modernization, Oversight, and Continuity Act of 2010” amendment was introduced, allowing the Secretary of Treasury to mint Silver American Eagles in quantities sufficient to meet public demand.[ix]

The American Silver Eagle has been a favorite of beginner and experienced collectors alike. Each American Silver Eagle coin carries a face value of $1.00 USD, but the intrinsic value is much higher. The silver content of the coin will never fluctuate, but the metal’s spot price will move as demand dictates. Since first strike, this coin has represented the beauty, history, and value that coins can bring to any collection.

All data and information provided is intended solely for informative purposes and is not intended to be considered individualized advice or investment recommendations. You understand that you are using any and all information available on or through this site at your own risk.

This entry was posted in Silver. Bookmark the permalink.